Recently I was writing an Android application, in which I had to read data from a static text file. I did not know where to keep the file and how to refer that file in the program (in windows/*nix OS we used to provide path to the file in file system). After surfing the internet enough, found a solution to this problem.

Note: This post helps you to read from a static application specific internal files.

1) The IDE which I used to develop Android applications is Eclipse and I assume that you already have an Android project opened and the static file to be read.

2) The name of the static file which I am going to use in this example is dictionary.txt 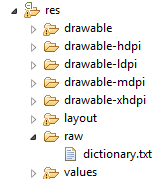 4) After adding the file, just Build the Project and make sure that build is successful.
5) Now, in the "gen" directory, inside your package, Open the R.java file. You might get to see something similar to this
public static final class raw {
public static final int dictionary=0x......;
}

6) Now, this static file will be included in the ".apk" file. As to read from the file, the following piece of code would do that job. You may have to add the appropriate try-catch blocks.

String lineread = "";
while ((lineread = filereader.readLine()) != null)
{
System.err.println ("Read " + lineread);
}
filereader.close();
7) In order to view the files in development environment or emulator itself, there is a perspective called DDMS in Eclipse, just switch to that and have your Android Virtual Device started. 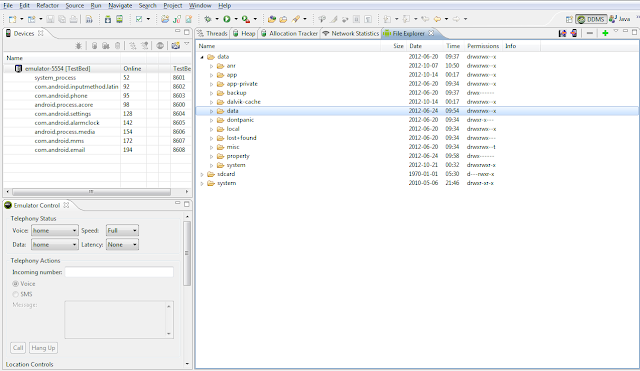